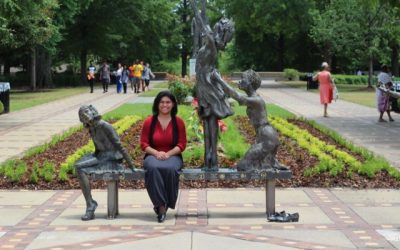 We arrived in Birmingham on Sunday morning in time to attend the service at The 16th Street Baptist Church.  We were so graciously and warmly welcomed!  Our group represented many different religious and non-religious traditions, but all of us thoroughly enjoyed the entire, inspiring service and the beauty of the congregation and the building.

Our next stop was Kelly Ingram Park which was a central meeting place for Birmingham civil rights activities.  For several days in early May,1963, people, including children, peacefully demonstrated for civil rights in and around the park.  The city responded by arresting many, including taking many children to jail, shooting water from high-power firefighting hoses at the peaceful protesters, and having police dogs attack.

There are two historic walking paths in and around the park marked by gold or blue signs.

We weren’t able to capture the entire statute with our camera, but this piece called The Four Spirits is a beautiful and memorable tribute to the four little girls killed in the bombing of the 16th Street Baptist Church.

There are other pieces of artwork in the park to recall the time of the 1963 Birmingham Children’s Crusade, including sculptures of children in a jail cell and another of fire hoses. These two pieces depict the use of police dogs:

The museum has many exhibits to help explain the civil rights struggles that happened in Birmingham.